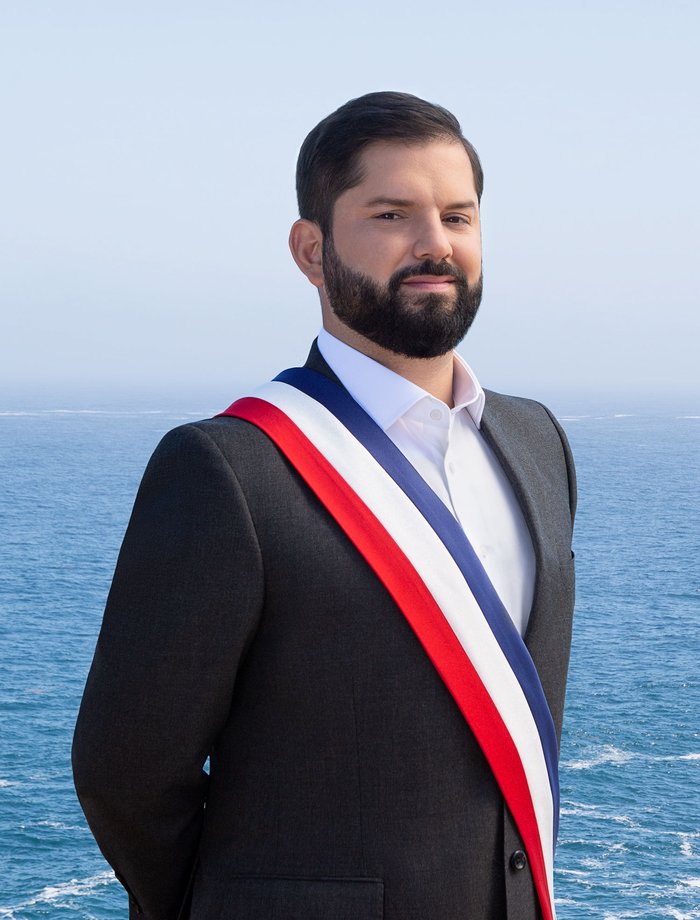 Gabriel Boric Font was born in Punta Arenas on February 11, 1986, the eldest child of María Soledad Font Aguilera, of Catalan descent, and Luis Javier Boric Scarpa, of Croatian descent. The family still resides in the Magallanes Region along with their dog, Brownie.

He attended primary and secondary school at The British School in Punta Arenas, at one time serving as class president. During his school years, at age 15, he went on a student exchange to France, where he was hosted by Josette Hocquard and Norbert Steimetz in the city of Toul.

After graduating from secondary school in 2004, he entered the Universidad de Chile Faculty of Law, where his academic performance earned him teaching assistantships in several courses, including International Human Rights Law, the Institutional History of Chile, and Justice Theory.

He graduated from law school in 2009, but it was politics, rather than law, that became his passion and has been his calling for many years now.

As a student, in 1999-2000 he facilitated the re-establishment of the Federation of Secondary School Students of Punta Arenas.

In late 2011, after one of the most tumultuous years of student mobilizations since the country’s return to democracy, he won the election to lead the Universidad de Chile Student Federation, defeating Camila Vallejo, a fellow student who has remained a longtime political ally.  This post also enabled him to deepen his ties with his friend and classmate, Giorgio Jackson.

In 2013, he entered the broader political arena by becoming a candidate for congressional deputy of District 28 (Antarctica, Cape Horn, Laguna Blanca, Natales, Porvenir, Primavera, Punta Arenas, Río Verde, San Gregorio, Timaukel, and Torres del Paine). He was first past the post in his district and was elected without the backing of a traditional coalition.

In the first month of his first term (2014-2018), he and Giorgio Jackson presented a legislative bill to reduce parliamentary salaries. He also sat on the standing committees on Human Rights and Indigenous Peoples; Remote Areas and the Chilean Antarctica; and Labor and Social Security.

In 2016, he again paired with his colleague Jackson to create the Frente Amplio political party, launching the presidential candidacy of current constitutional convention delegate Beatriz Sánchez. In that election, just a few months after its formation, the Frente Amplio managed to become the third political power in the country, and he was reelected as deputy, earning the second largest majority in the country.

In this second term, he sat on the Constitution, Legislation, Justice and Regulations, and Remote Areas and the Chilean Antarctica standing committees.

In 2019, one of his final years as a congressional deputy, Chile experienced a tremendous socio-political crisis that erupted on October 18th. After weeks of widespread displays of social unrest over a series of actions and a general disengagement of the political and corporate classes, Gabriel Boric signed the “Agreement for Social Peace and a New Constitution.” This pact led to the constitutional reform process that is currently underway in the country, with guaranteed gender parity, and will result in the first democratic Constitution in Chilean history.

Since 2019, President Boric has been in a relationship with Irina Karamanos, a political scientist, anthropologist, and sociologist who has proposed rethinking the role of first lady.

On March 17, 2021, Gabriel Boric Font was proclaimed the presidential candidate of his political party, Convergencia Social, with the added backing of Revolución Democrática. Thus began the process of collecting signatures that would end on May 17th with his official registration in the presidential race to La Moneda Palace, and his call for widespread participation of opposition parties in the primaries.

In those primaries, held on July 18, 2021, President Boric ran for the candidacy of his own coalition, Apruebo Dignidad, earning 60% of the total vote in a victory against his competitor, Daniel Jadue.

In the first round of the presidential elections, on November 21, he took second place with 25.83% of the vote. This galvanized the citizenry and invigorated his campaign for the second round, as it became apparent to voters that what was at stake was more than just the presidency. On December 19, President Boric won in the second round at the ballot box with 55.8% of the total vote, significantly outpacing his opponent and taking power with the highest margin, the highest voter turnout, and at the youngest age of any president in the history of Chile.