President Piñera enacts Marriage Equality Law: “Freedom is built on recognizing each other as equal in dignity and rights”

The new law allows for marriage between same-sex couples, recognizing all types of family project and promoting the freedom of individuals. “The State must always fulfill its fundamental role in promoting a free, diverse, tolerant and inclusive society,” the President said. 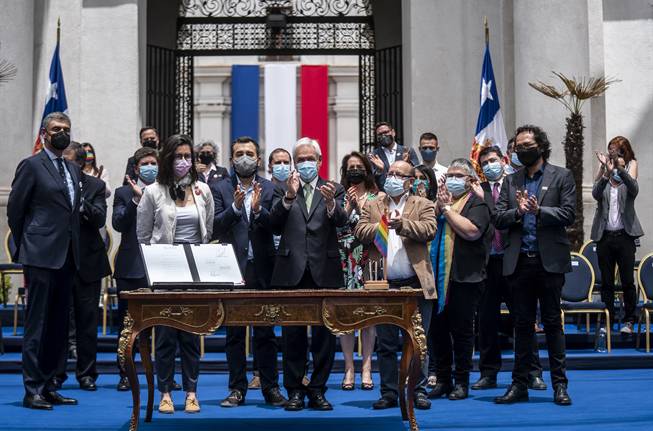 “With today’s enactment of the Marriage Equality Law, all couples will be able to live their love, get married and form a family if they want to, regardless of their sexual orientation, with the dignity and legal protection that they undoubtedly need and deserve,” the President stated. The declaration was given at La Moneda Palace and attended by ministers, undersecretaries, members of Congress and civil society representatives.

“Freedom is built on recognizing each other as equal in dignity and rights, equal before the law, and respecting and valuing the diversity of identities and life projects. Of course, this freedom must also include the freedom to love,” the President said. He had given the project vital importance in June of this year.

The President acknowledged the work of Congress in approving the initiative, as well as the efforts of civil society representatives.

“Today is a good day for freedom, family, dignity, equality and appreciation and respect for diversity in Chilean society,” the President concluded.

The enactment of this law is another step towards equality among Chilean families and a recognition of all types of family project, enhancing the value of personal autonomy and the fundamental right of each Chilean to decide how to live their lives.

The new law is part of a series of initiatives advanced and enacted by President Piñera to protect and promote diversity. Among them are the Antidiscrimination Law, the Civil Union Agreement Law and the Gender Identity Law.