Foreign Affairs Minister Urrejola concludes negotiations to modernize Chile-European Union Agreement: Find out what the benefits will be

The step will provide an updated institutional framework and offer Chile better access to the European market. The agreement also improves conditions for small and medium-sized enterprises (SMEs) in Europe’s public markets. 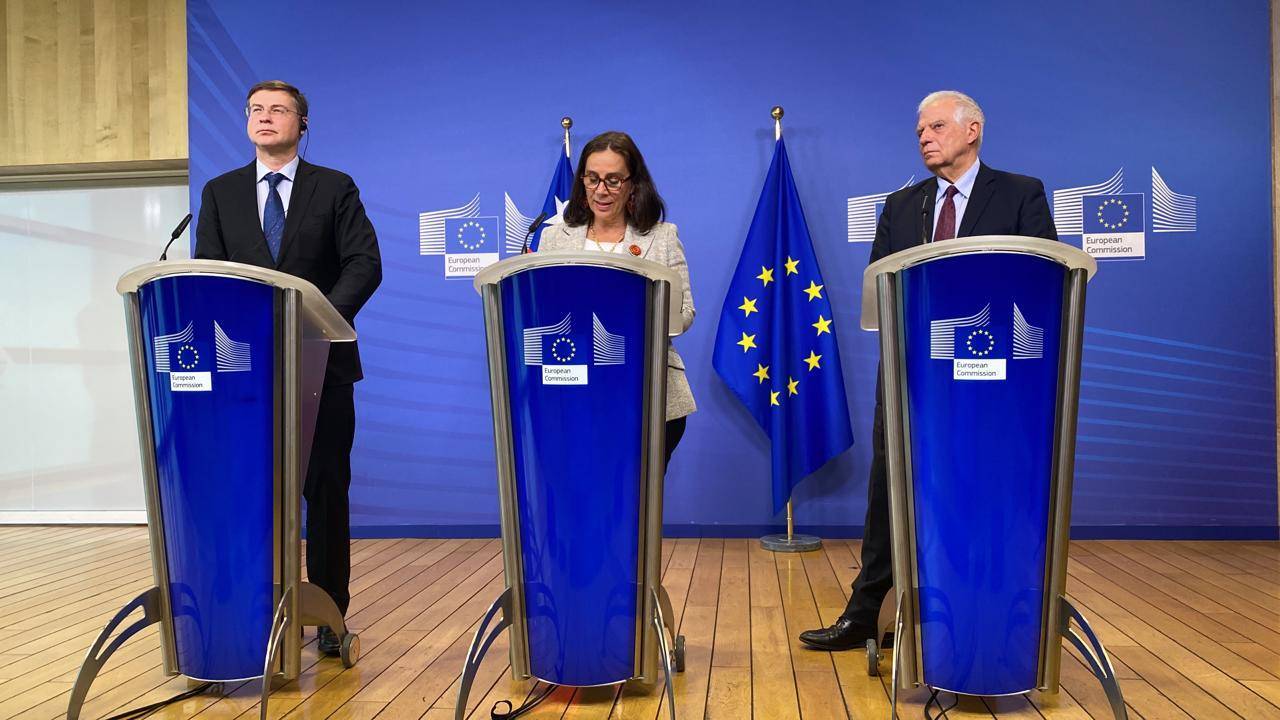 The modernization of the Chile-European Union Agreement has been signed in Brussels. The ceremony was attended by Chile’s Foreign Affairs Minister Antonia Urrejola and International Economic Relations Undersecretary José Miguel Ahumada, alongside authorities from the European Union (EU) led by Executive Vice-President and Trade Commissioner Valdis Dombrovskis and High Representative of the Union for Foreign Affairs Josep Borrell.

A total of ten rounds of negotiations took place, followed by conversations and technical and political meetings during 2022, which sought to safeguard the strategic and regulatory autonomy of Chile and the EU.

As well as bringing new and improved benefits for both parties, the modernization of the agreement will provide an updated institutional framework that will allow us to face the new challenges that have arisen in foreign trade in recent decades. It will also grant better access to the European market and offer permanent dispute resolution mechanisms between investors and effective, impartial and transparent states.

The agreement will be the greenest that Chile has signed, establishing high levels of sustainable development, and promoting environmental and labor protection.

It will be the first time that the European Union has signed a chapter on Gender and Trade in an economic-commercial agreement, which seeks to promote equal opportunities and treatment between men and women. The updated agreement will also include a new chapter on digital trade, which addresses the current challenges in foreign trade.

Another notable item included in the updated agreement is that the percentage of products covered by some sort of tariff reduction in the European Union will expand from 94.7% to 99.6% of tariff lines. This represents almost all Chilean exports to the European Union. The agreement also offers improved conditions for SMEs in European public markets.

In a first for Chile, the agreement will include the creation of a permanent investment court system to resolve disputes between investors and states. It includes high ethical standards for judges, appeal processes and gender considerations when appointing judges.

Chile’s trade with the EU has grown considerably in the last 20 years, with an annual average of 3.7% in exports and 7.2% in imports.

After the conclusion of negotiations, the legal review will begin, followed by the translation of the texts into the official languages of the EU. Considering the timelines for these types of processes, it is estimated that the updated agreement could be signed by the end of next year, ideally during the ECLAC-EU Summit to be held in November 2023.

After it is signed, the Association Agreement must be approved by the respective parliaments of the countries that make up the European Union, as well as the National Congress of Chile. It is hoped that during December the EU and Chile will publish the agreement text in English.

Benefits of the agreement

Among the main benefits of the updated agreement are:

99.6% of Chilean products will be able to enter the European Union with preferential tariffs.

Documentation and data requirements for the import, export and transit of goods will be minimized, customs procedures will be simplified, and the use of information technologies and electronic payments will be made easier.

Chilean suppliers will be able to access the European public market under the same terms as any European supplier.

A chapter on digital trade is included. This was an area not addressed by the current Association Agreement.

New stakeholders will be encouraged to participate free of protectionist or anti-competitive practices, which will increase and improve the offer of telecommunications services for consumers.

The agreement aims to strengthen the relationship between trade and sustainable economic development. There is priority concern for areas such as labor rights and environmental protection.

Chile also seeks to safeguard the necessary regulatory autonomy to establish its own levels of environmental and labor protection.

The agreement promotes equal opportunities and treatment so that both men and women benefit from its trade provisions.

This chapter represents huge progress in terms of transparency, setting a higher standard in relation to the current agreement.

This chapter represents one of the greatest legal steps forward from the current agreement, where there was no regulation in this regard. The chapter enshrines the highest international anti-corruption standards, applicable to both the public and private sectors.

The negotiating teams sought to protect the strategic autonomy of both parties to establish public policies.

The agreement establishes clear and more favorable rules that will allow Chilean businesspersons to enter European territory to provide services or make investments, as well as to attend conferences and business meetings.

The updated agreement creates a single legal framework to protect investments between the parties, replacing the 15 current investment promotion and protection agreements and regulating countries with which there is no bilateral investment agreement.