The President announced that the Government will focus on making progress with the priorities that the country needs and on a broad, cross-cutting and profound dialogue to respond to citizens’ demands. 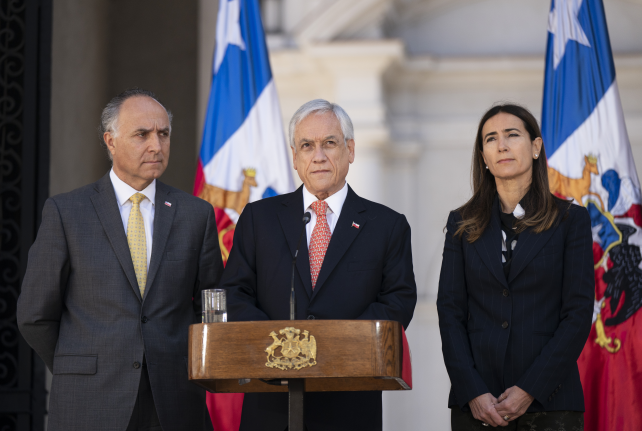 On Wednesday, President Sebastián Piñera announced that Chile will not hold the Asia-Pacific Economic Cooperation (APEC) meetings or the COP 25 climate change summit that were scheduled for November and December this year. This is in order to focus the Government’s efforts on resolving citizens’ demands.

“As the President of all Chileans, I must always put the problems and interests of the Chilean people, their needs, desires and hopes, at the front of the queue,” said the President. He was speaking from La Moneda Palace, accompanied by Foreign Affairs Minister Teodoro Ribera and Environment Minister Carolina Schmidt.

The President said that the Government's primary concern and priority is to concentrate fully on completely re-establishing public order, the security of citizens and social peace, as well as to drive forward the social agenda to respond to the principal demands of the citizens.

He added that he will promote a broad and profound process of dialogue throughout Chile and will talk to and reach agreement with the different political forces in order to achieve the agreements necessary for Congress to approve the laws that will bring into being the New Social Agenda.

The President also ratified his commitment to the objectives of APEC of promoting free trade, and to those of COP 25, as well as to transforming Chile into a carbon-neutral country and protecting the oceans and forests.

With regard to the world’s biggest climate change summit, President Piñera contacted the Secretary-General of the United Nations, António Guterres, who understood and supported the decision taken by the Government and ratified that Chile will continue to preside over COP until the United Kingdom hosts the meeting in 2020.