The two leaders met at the Elysée Palace, where they discussed the importance for Chile of ensuring the modernization of the EU-Chile Association Agreement, the relevance of advancing a global treaty for pandemic preparedness and response, the potential of green hydrogen development for clean growth and the need to make faster progress in combating climate change. 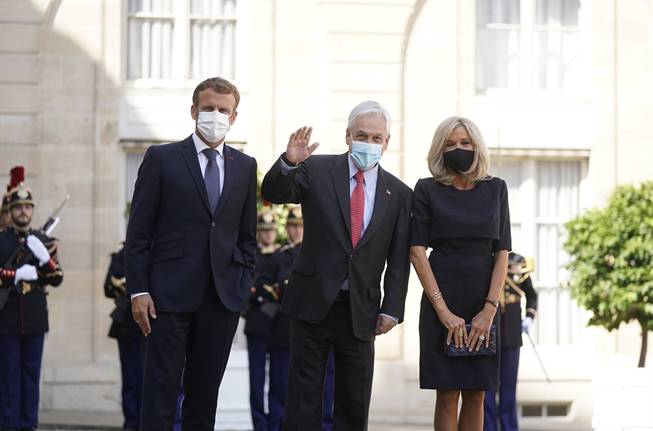 During the meeting, President Piñera stressed the importance of ensuring the modernization of the Association Agreement between Chile and the European Union, the country’s third largest trading partner.

“We talked about how to accelerate the new Association Agreement between France, the EU and Chile that is about to be reached,” President Piñera said in a joint statement with the French President at the Elysée Palace in Paris.

The meeting also addressed the importance of advancing a global treaty for pandemic preparedness and response, the potential of green hydrogen development for clean growth and the need to make faster progress in combating climate change, with a focus on protecting the oceans.

The two presidents also discussed how the two nations could join forces to establish a strategic alliance on issues such as forest protection.

“We talked about the challenges of global warming and climate change, which, at this point, is a climate crisis. Changing the course of history and preventing a climate catastrophe is the greatest challenge facing countries and their citizens today,” President Piñera stated.

France is one of Chile’s main trading partners in Europe. The two countries also share a long tradition of joint work and cooperation in various areas, such as science, education, culture, defense, gender and innovation.

The relationship between France and Chile has gained significant momentum since the roadmap signed by Presidents Macron and Piñera in 2018 to deepen trade relations between Chile and the EU. It also had the purpose of jointly promoting the development of clean energy projects, with the aim of Chile and France becoming leaders in promoting a cleaner and more sustainable planet, as well as collaboration on defense and cybersecurity matters.

The presidents have strengthened ties through a series of meetings that include President Piñera’s visit to France in 2018, in addition to his participation in the G7 Summit in Biarritz in 2019 and the joint promotion of forums on environmental protection within the United Nations framework.