In an emotional and historic ceremony in the Hall of Honor of the National Congress building, Gabriel Boric became the 34th President in the republican history of Chile. 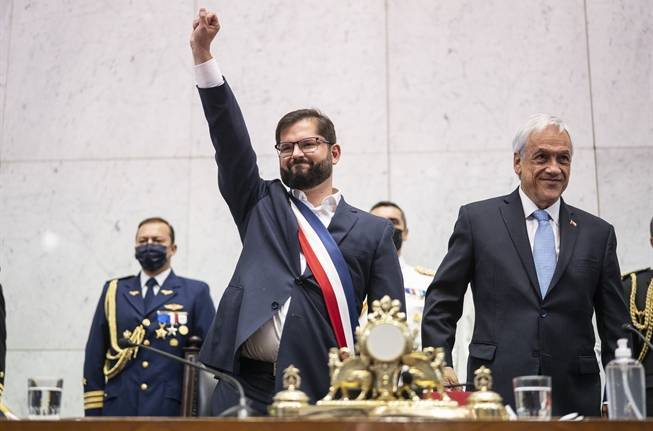 The presidential handover took place in a historic ceremony in the Hall of Honor of the National Congress building, where President Gabriel Boric Font assumed the first national magistracy, becoming the 34th head of state in Chilean history.

The President, accompanied by his whole family and his full cabinet of ministers and important international authorities who had been invited to the ceremony, received an ovation from those present upon receiving the presidential sash, in a moment of profound emotion.

On leaving the ceremony, the President addressed the press, where he promised to do his utmost to meet the challenges that lie ahead. “I’m so excited right now, with a great sense of responsibility, of the duty we owe to the people of Chile. Know that we are going to do our best to rise to the challenges we face as a country. Truthfully, it’s difficult to find the words; I’m going to address our country in the Plaza de la Constitución today, where I’ll talk in greater detail.”

Then, as tradition dictates, President Boric boarded a convertible Ford Galaxie headed for the Cerro Castillo Palace in Viña del Mar. On the way, he received many expressions of affection from the hundreds of people who stood by the side of the road to greet him.

President Boric had a lunch scheduled with all the authorities and foreign leaders invited to the ceremony. Later, he will head to La Moneda Palace, where he will address his first words as President to the people who arrive at the Plaza de la Constitución.