Chile receives another 209,000 doses of the Pfizer-BioNTech vaccine and the CanSino laboratory requests authorization from the ISP

The Science Minister and International Economic Relations Undersecretary (SUBREI) reported that Chile has received over 11 million vaccines for the campaign; and that over 4.4 million people in Chile have already been inoculated. They highlighted that authorization for emergency use of the Canadian-Chinese laboratory CanSino’s vaccine would mean a further 1.8 million of these single-dose vaccines being added to the nation's portfolio. 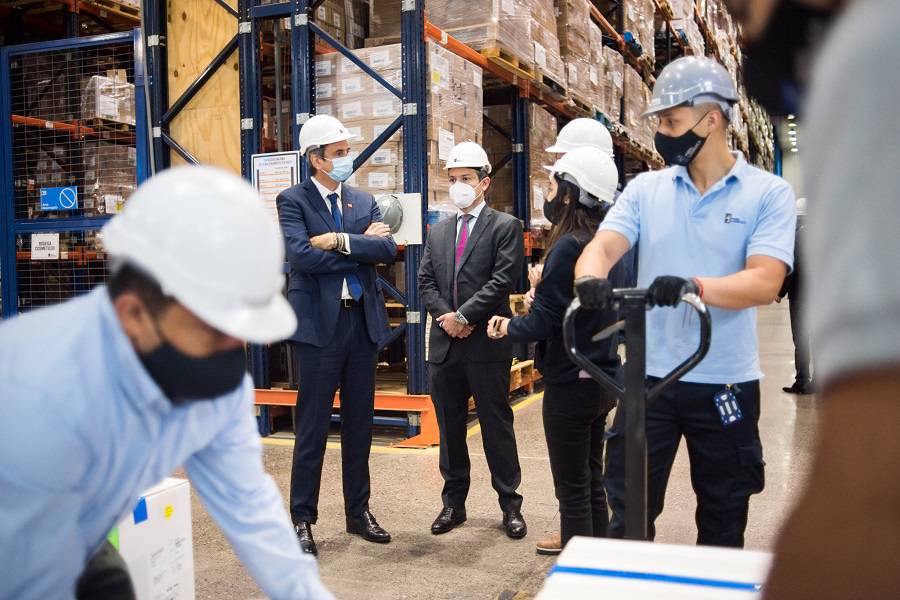 Science Minister Andrés Couve and International Economic Relations Undersecretary Rodrigo Yáñez received the eighth shipment of Pfizer-BioNTech vaccines at the Perilogistics logistics center and highlighted the progress that has been made with the clinical trials and trade agreements that have allowed Chile to become an international role model with its vaccination campaign.

The shipment of 209,625 new doses from Pfizer brings the total number of doses of this vaccine in Chile to 943,800. These come in addition to the Sinovac Laboratory shipments. “Taking Pfizer and Sinovac together, we've received some 11 million vaccine doses. It’s important to remember that the Pfizer vaccine has been approved by the Public Health Institute (ISP) and is highly effective, with very good safety standards. These shipments allow us to continue to move forward with the vaccination process. To date, 4,451,000 people have received the first dose and 1,270,000 people have received both doses in Chile,” Minister Andrés Couve stated.

In regard to the success of the vaccination rollout, the Science Minister highlighted the public support that the process has enjoyed, along with the periodic information provided on the progress made: “This achievement is a collective effort that has had unity of purpose. We’ve looked ahead and collaborated with entities within and beyond the government. We’ve used scientific and technical evidence to decide which vaccines to use in our country. Our economic openness allowed us to reach trade agreements with various suppliers early on, and the substantial capacity organized by the Health Ministry has made it possible for us to distribute these vaccines,” he said.

In regard to the importance of the trade agreements signed by Chile, Undersecretary Rodrigo Yáñez said, “we hope that the Pfizer vaccines and nearly 10 million Sinovac doses that have come to Chile will allow us to meet our commitment to inoculate the high-risk population during the first quarter. Together with Israel, we are steadily moving towards becoming the first country to achieve herd immunity by mid-year. We are working very hard with the Science and Health Ministries under the direction of President Piñera to achieve this goal. This is an important collective public and private achievement,” he said.

In regard to the application submitted to the ISP this morning for emergency use of the Canadian-Chinese CanSino vaccine in Chile, Minister Couve stated, “having the option of a new vaccine is important to our strategy. We’ve been working since May to conduct clinical trials in our country through a scientific advisory council and a consortium of universities. CanSino is one of the trials that we are contributing to.”

The Phase III CanSino vaccine trial is being led by Dr. Fernando Lanas of Universidad de la Frontera in Temuco, along with research and clinical centers in Valdivia, Osorno, Puerto Montt and some centers in the Metropolitan Region. CanSino has conducted clinical trials of this vaccine at the global level. Its vaccine is based on a viral adenovirus vector and has been given to over 40,000 people.

The Science Minister explained that this is the largest clinical trial in our country, “which allows the vaccination and research processes to move forward together and contribute to an unprecedented effort: a clinical trial led by universities outside of Santiago, designed to produce knowledge for Chile and the world. Around 3,500 people have been recruited as volunteers in this process. This vaccine requires a single dose and is being added as a very important element of the strategy for the coming months. Again, early action was key here, because scientific research opened the doors to signing trade agreements that will allow us to have another 1.8 million vaccine doses,” he added.